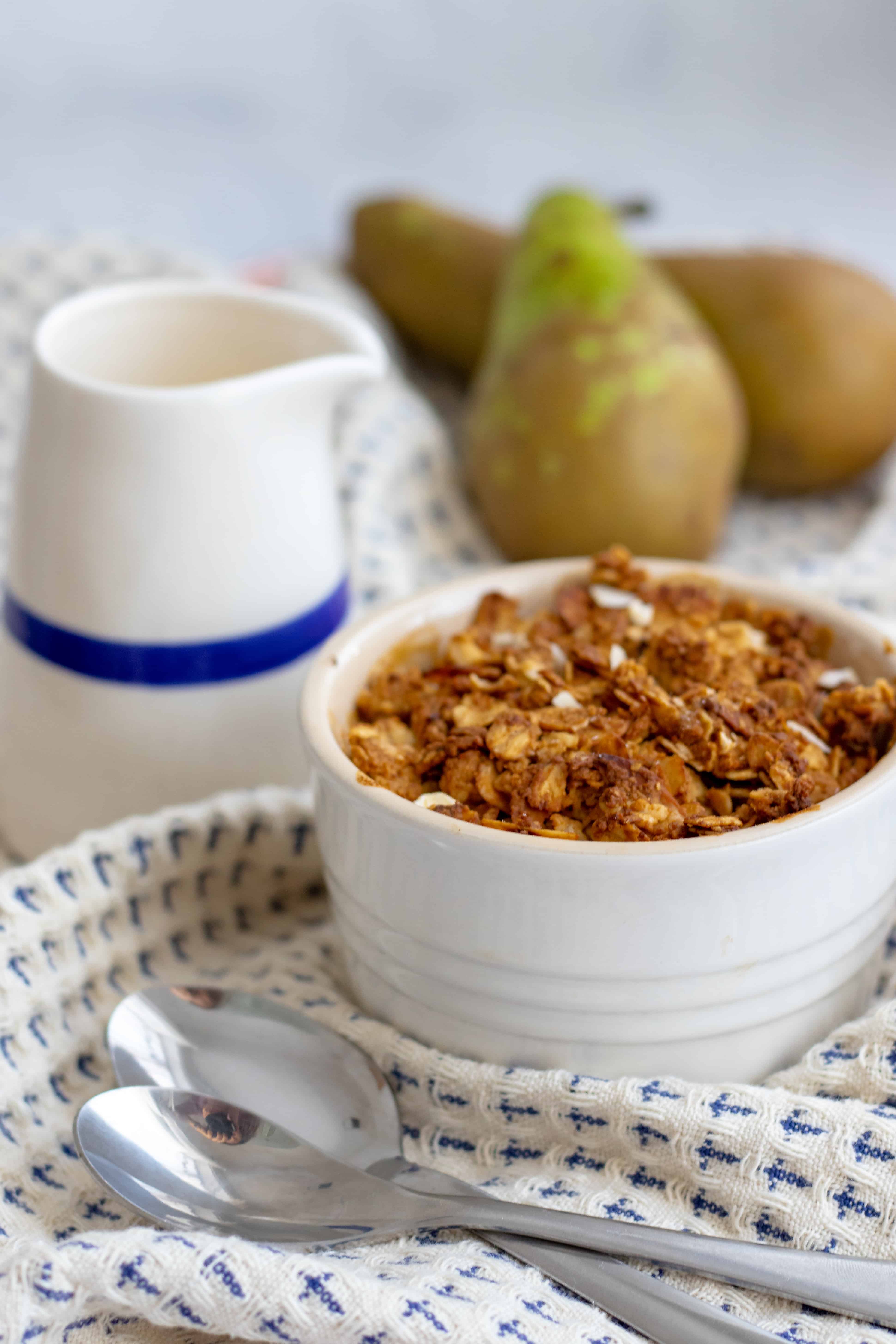 Crumble is the ultimate British comfort classic. I don’t know a single person who wouldn’t happily demolish a portion or two on a Sunday lunchtime. My pear and ginger crumble is healthy and sexy. Sweet juicy pears infused with fiery ginger and topped with clusters of nutty oaty goodness. Damn GIRL, it’s good. 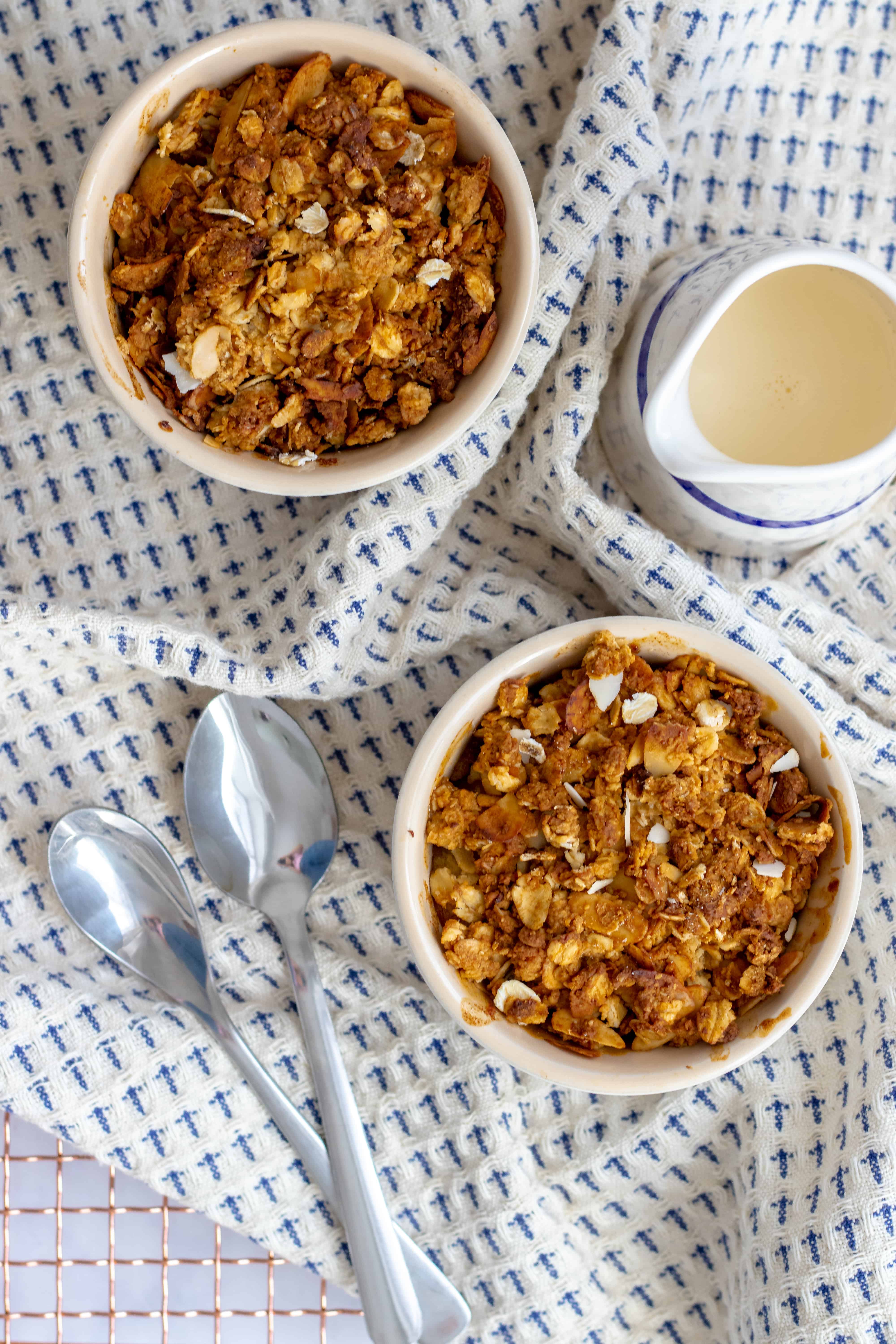 Crumbles were first invented in World War II when rationings were strife. Shortcrust pastry was substituted for a more economical crumble topping in what I would argue as the best swap ever made. I wouldn’t call my pear and ginger crumble a ration; but you can certainly swap the pear for whichever fruit needs using up. It’s a win win – one delicious pud, plus a reduction of food waste. 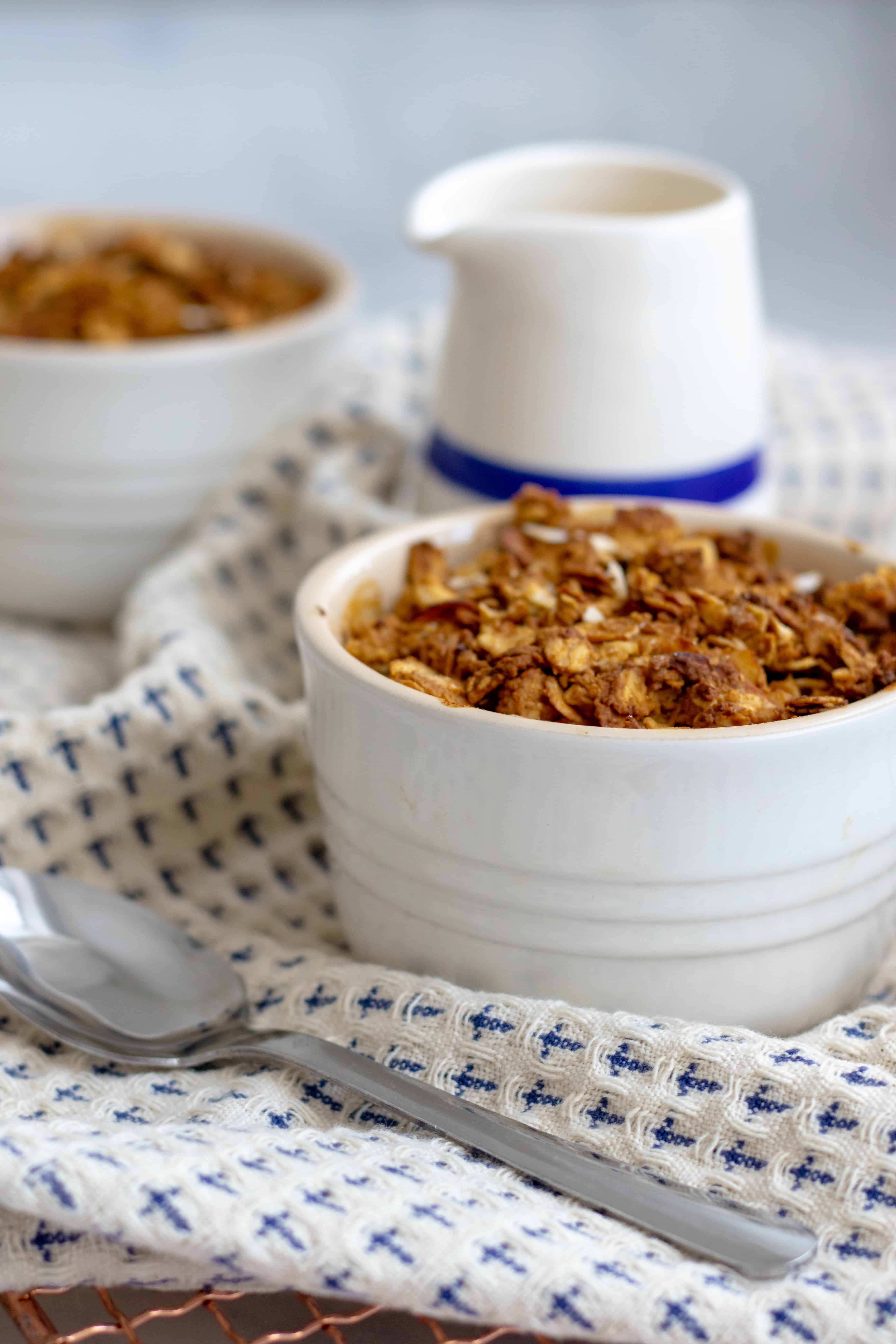 This pear and ginger crumble is jam-packed full of nutrients. Pears are a fantastic source of dietary fibre as well as being rich in vitamin C, vitamin K and copper. Ginger is also pretty amazing and currently centre of lot’s of exciting research. It contains a compound called gingerols – a powerful anti-inflammatory substance used to treat illnesses including arthritis and nausea. 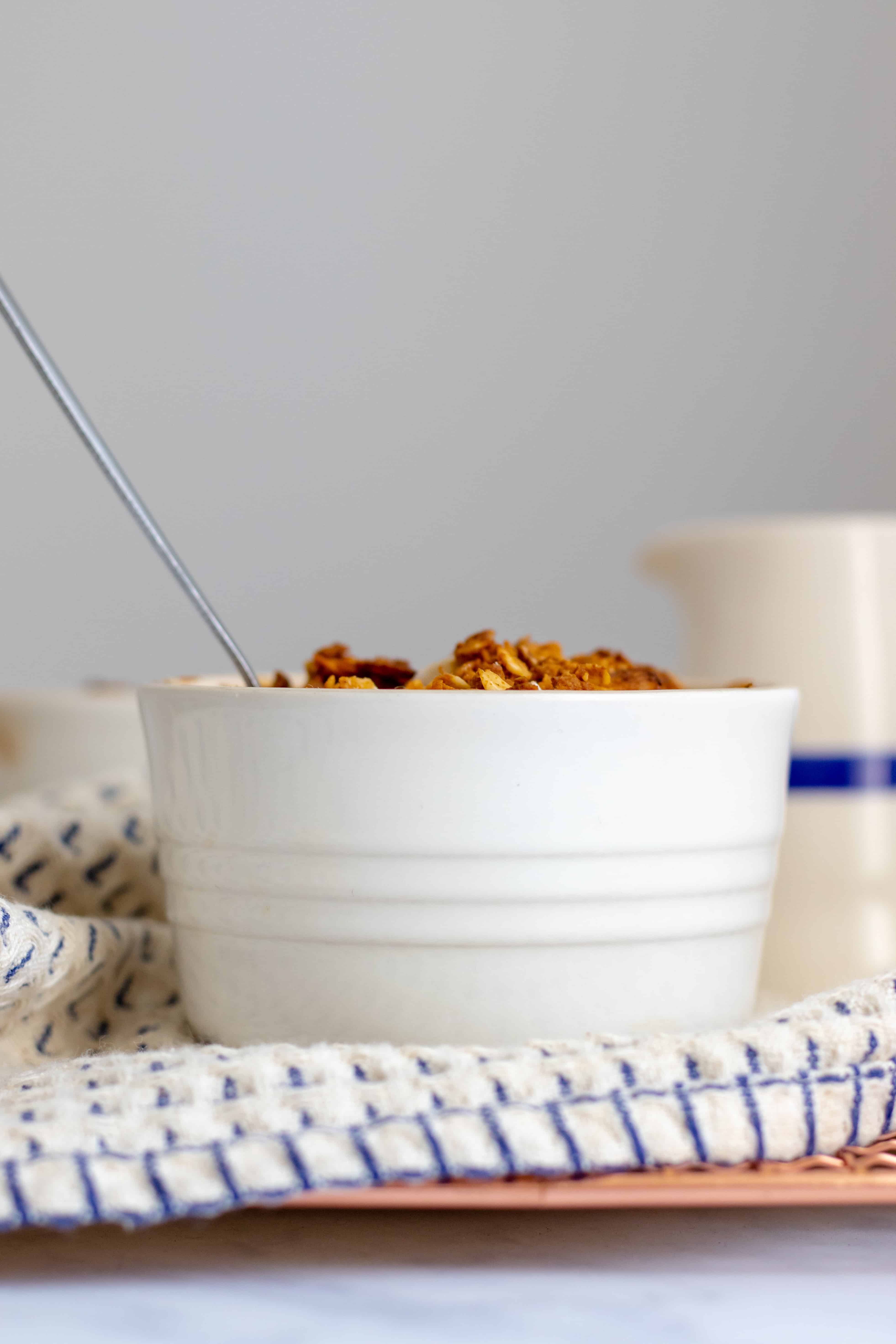 I like these pear and ginger crumbles in little ramekins partly because they look cute, but mostly because they stop me eating the whole thing in one go (who’s portion control??). You can of course use a more classic dish, the cooking times remain the same. 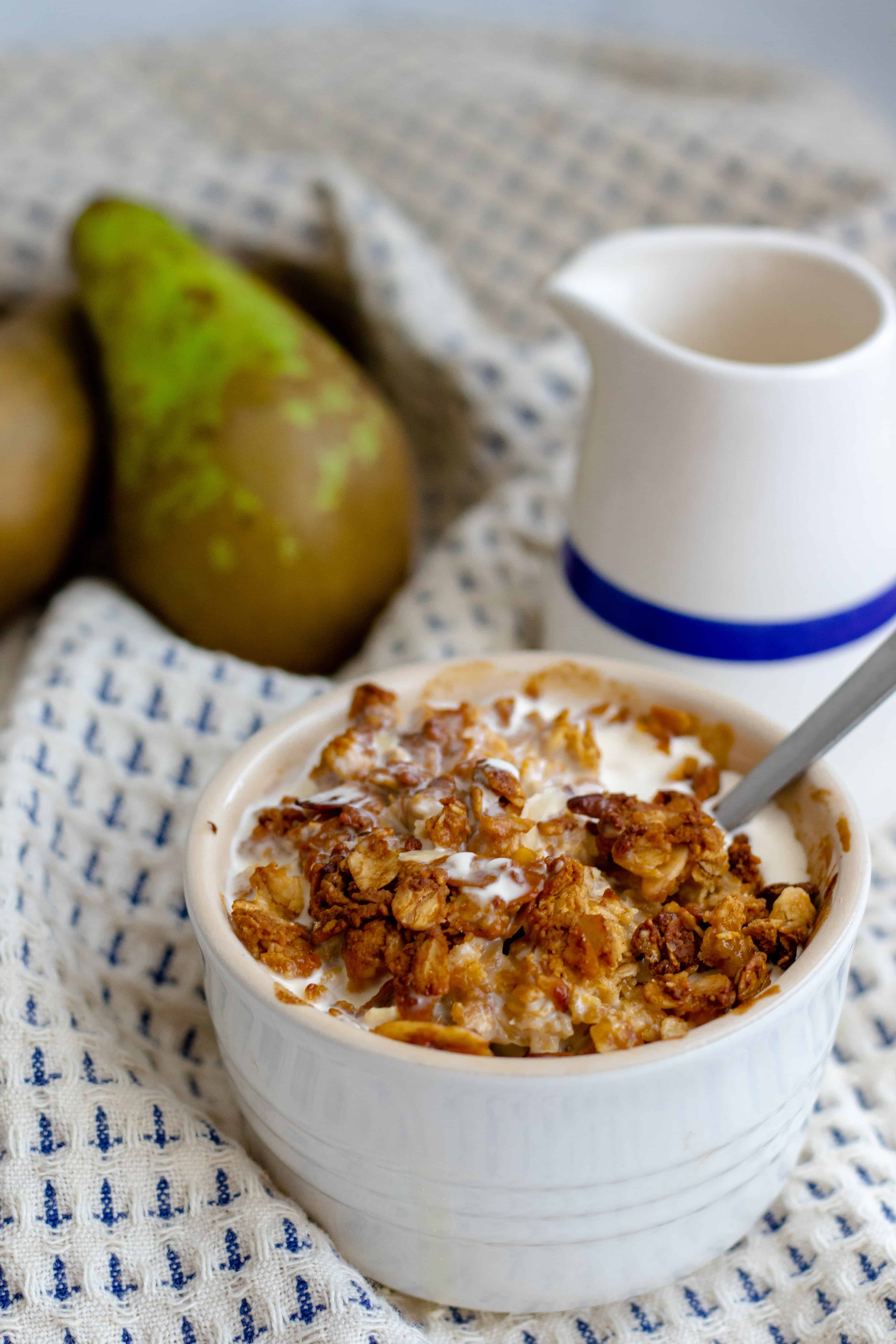 Serve this pear and ginger crumble with a splash of custard or scoop of ice-cream for a crowd-pleasing belly-warming dessert or eat them cold with a dollop of yoghurt for a winning weekend breakfast. Either way you will love it. As per, if you make this, be sure to send a picture to my IG @georgieeatsuk, or leave me a comment down below. Keep smiling!

The ultimate winter pud! Sweet juicy pears with a kick of gingery heat topped with a nutty oat crumble. Perfect for a dinner party or just a cozy night in. GF, vegan & healthy.

For The Crumble Topping

This crumble can either made in four individual ramekins as in the recipe, or in one medium oven proof dish. The cooking times remain the same.

If you want to make my pear and ginger crumble in advance follow the recipe up until step 4. Divide your crumble mixture over the fruit then store covered in the fridge for up to 3 days until ready to bake. You can also freeze the crumble at this stage for up to 3 months. Just defrost before following the cooking instructions.

This crumble topping works perfectly with any fruit. You can substitute the ground ginger with another spice or leave it out all together. A few of my favourite crumble combinations are: Apple, Blackberry & Cinnamon, Rhubarb & Ginger and Plum & Maple.

Gluten Free: Make sure that your oats are certified gluten free.

If you loved this recipe, you have GOT to try my rhubarb crumble recipe too!

WANT ONE EXCLUSIVE RECIPE EACH MONTH?

Welcome!! I'm Georgie, a freelance recipe developer and food writer. Here on Georgie Eats you will find an abundance of simple, vegan-ish recipes that use the best of seasonal ingredients to help you cook and eat more sustainably. Enjoy! Read More →

WANT TO FIND SOMETHING?

WANT AN EXCLUSIVE GEORGIE EATS RECIPE SENT STRAIGHT TO YOUR INBOX EACH MONTH?