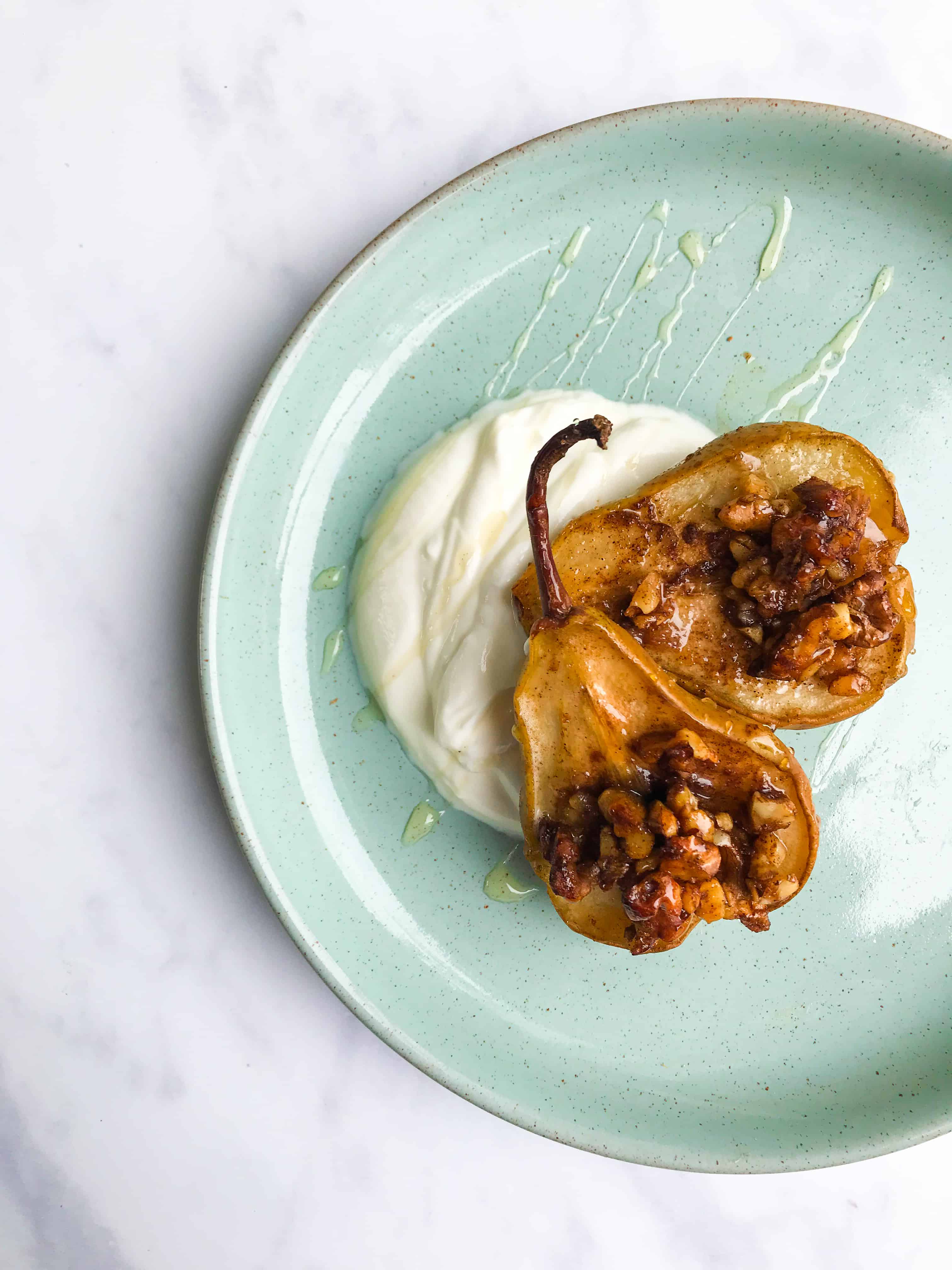 These walnut baked pears will make the world marvel at your ability to impress on a whim. Don’t you envy that person who seems to have life so effortlessly sussed? Ever wonder why you can’t concoct deliciousness for a crowd of unexpected guests? Well, these walnut baked pears are a spectacular solution and are still super easy. They are the perfect weekend breakfast or simplistic weeknight dessert which polishes your culinary halo. 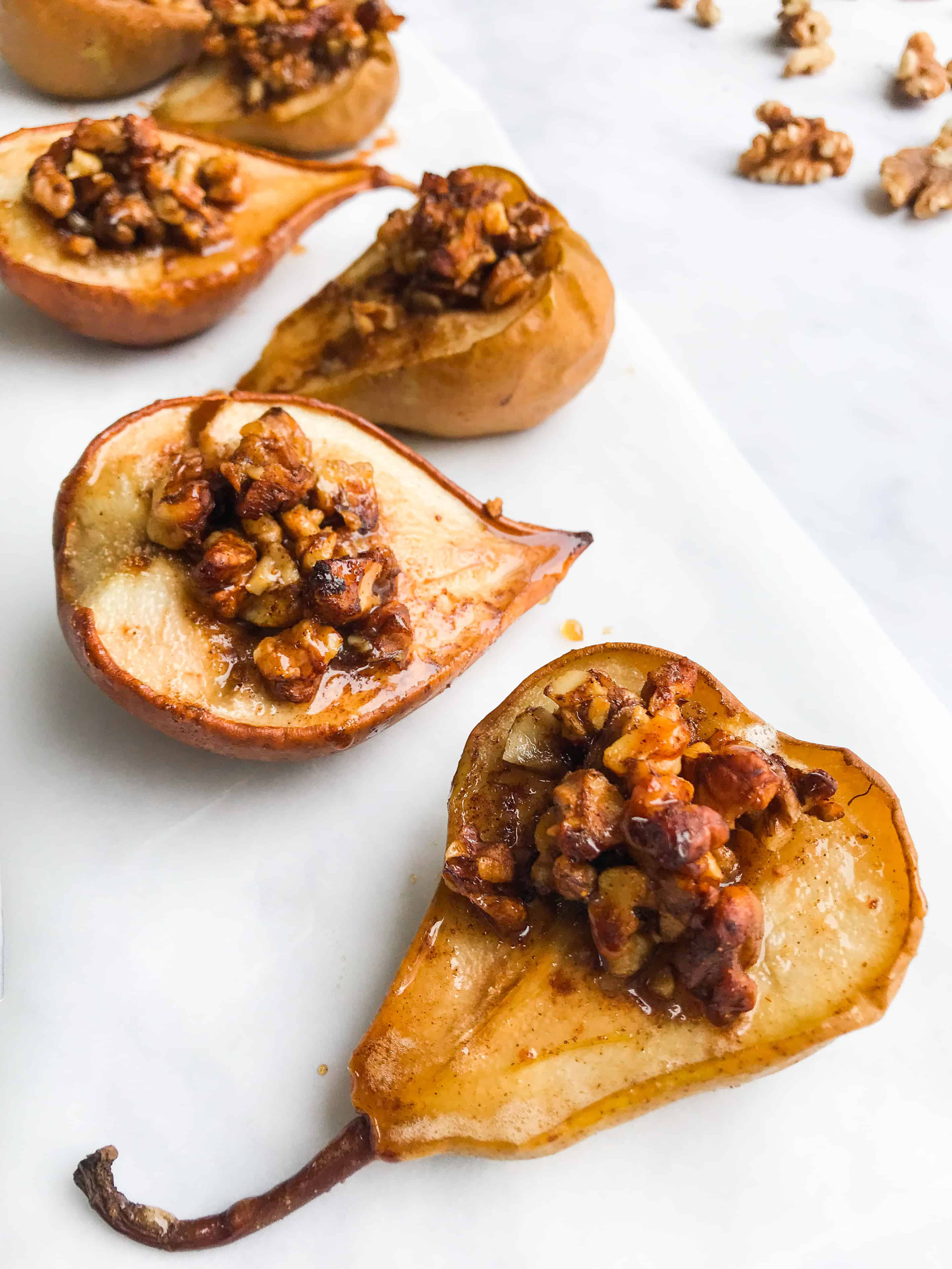 The inspiration for these walnut baked pears came to me whilst watching celebrity Masterchef last week. One of the contestants decided to make amaretto baked peaches, and although she was unsuccessful I thought that the simplicity of the baked fruit was ingenious. I have taken influence from the seasons in this recipe and used gorgeous ripe pears with an autumnal cinnamon flavour seeping through. In my opinion, cinnamon is an absolute winner and when it’s blustery outside nothing can beat its comforting warmth. 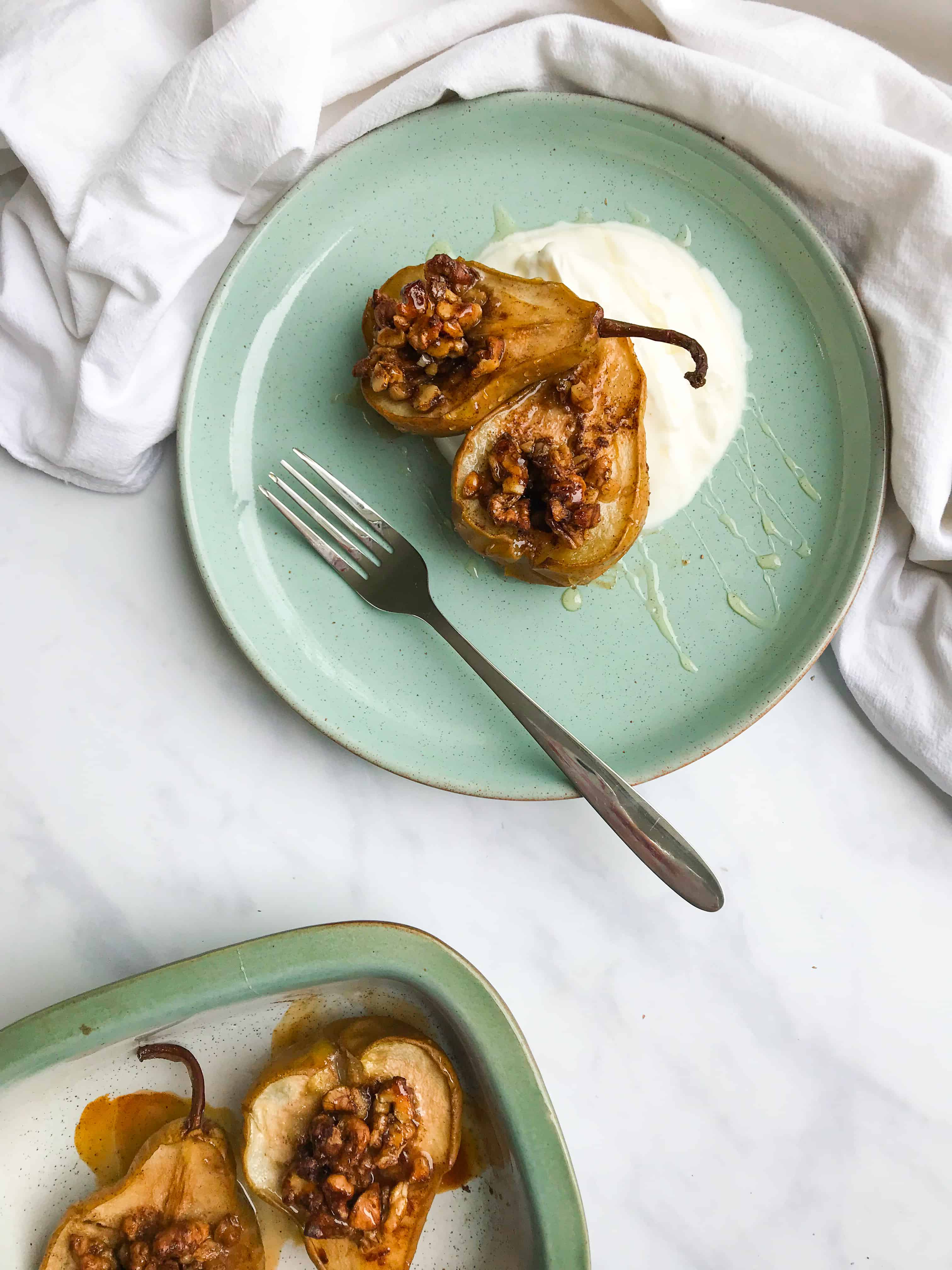 Although these walnut baked pears might feel indulgent they are in fact super good for you. I have kept the skin on the pears in this recipe as it is much more nutritionally dense than the flesh. Pears are a fantastic source of dietary fibre as well as being rich in vitamin C, vitamin K and copper. Once paired with the protein and omega-3 filled walnuts it all comes together to make the ultimate guilt-free treat. 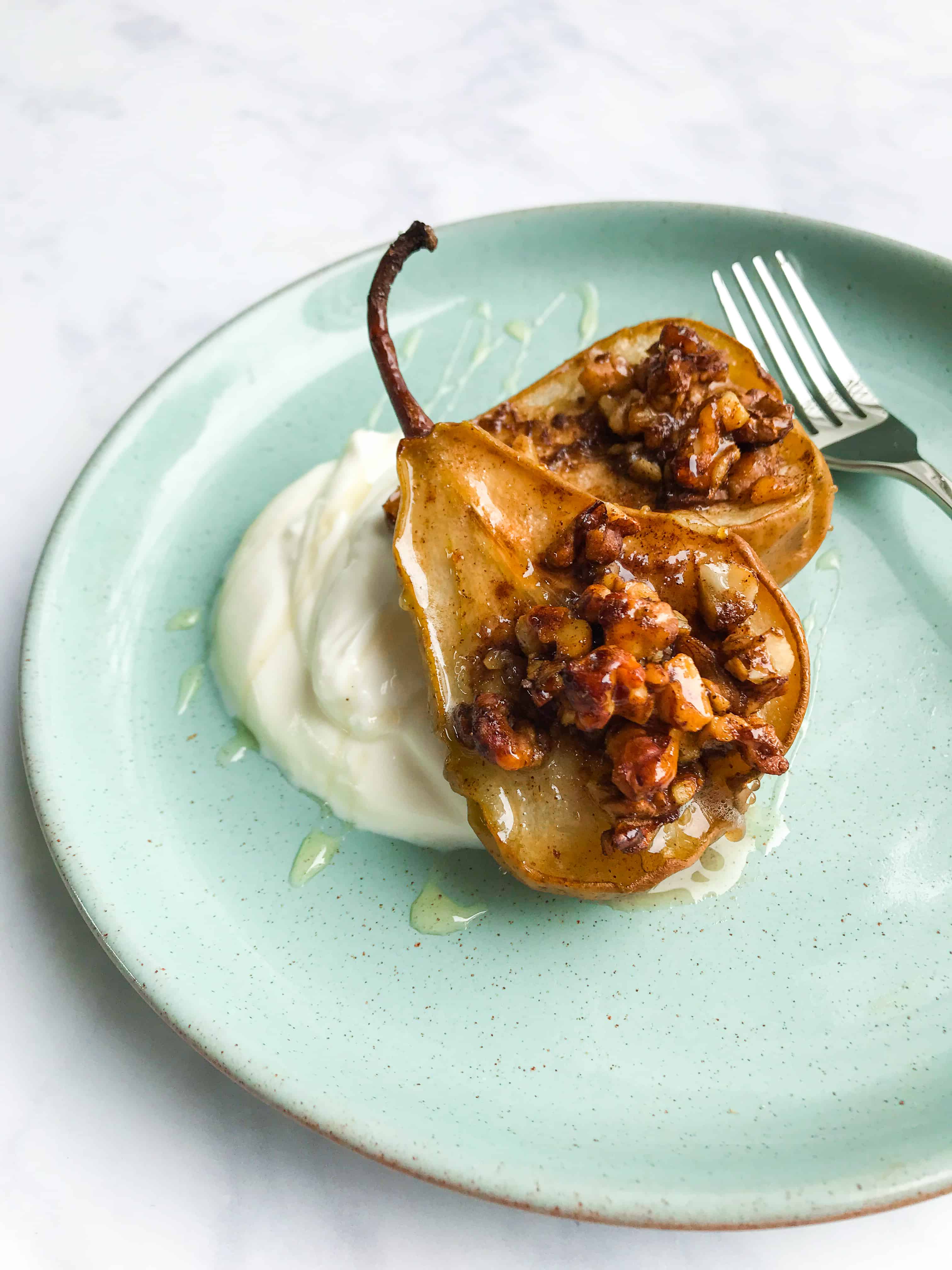 Fun fact: There are over 3000 varieties of pear in the world! For this recipe, I recommend using William or Bosc pears – both of which have been tried and tested. Feel free to experiment with other varieties also though. Just remember that the softer the pear the quicker the cooking time. 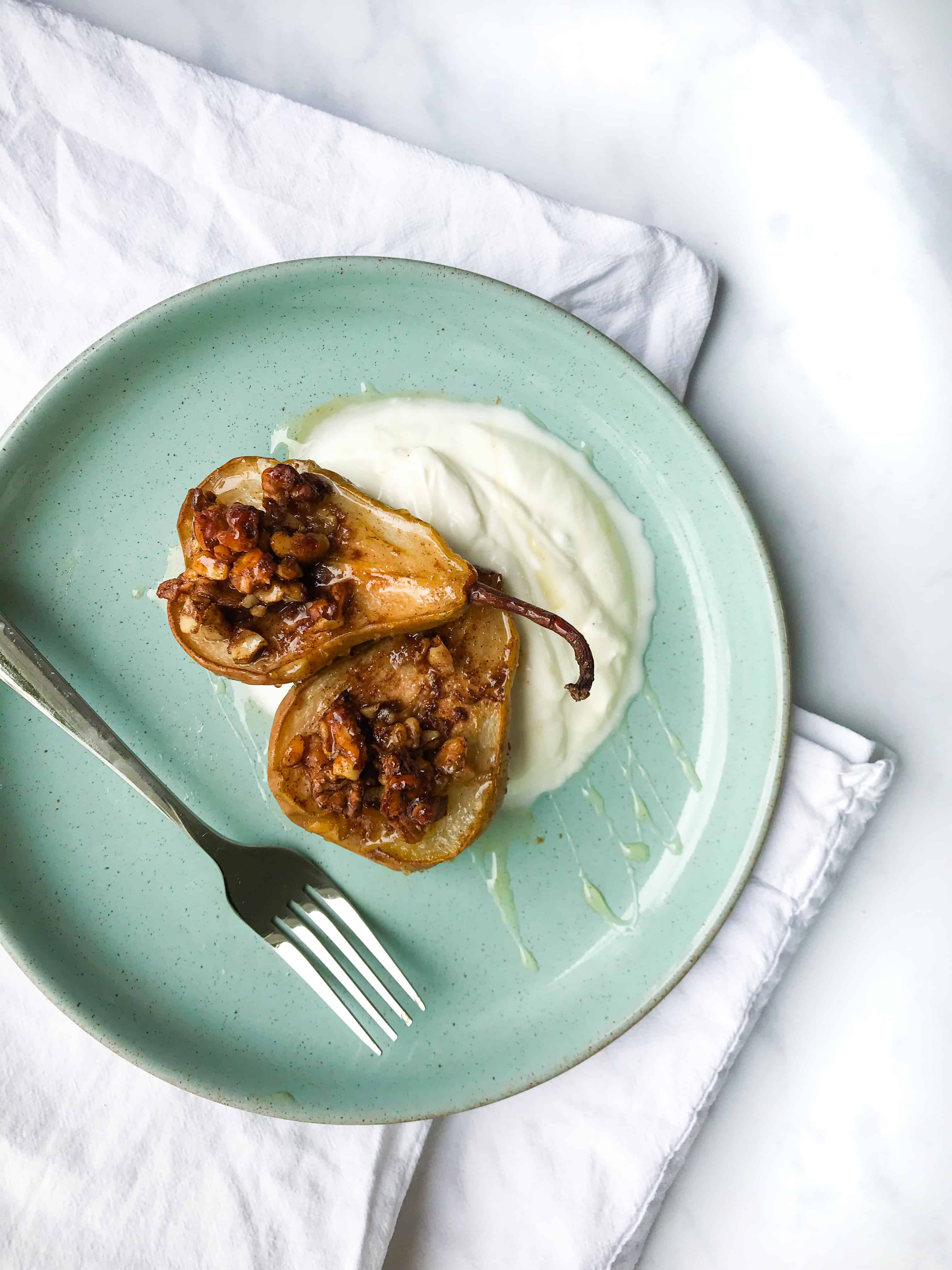 This is without a doubt the simplest sweet recipe to date on Georgie Eats. However, this fact does not subtract from the dishes worth as it is quick, easy and downright delicious. I would highly recommend giving my walnut baked pears a go – they are literally ZERO-STRESS. 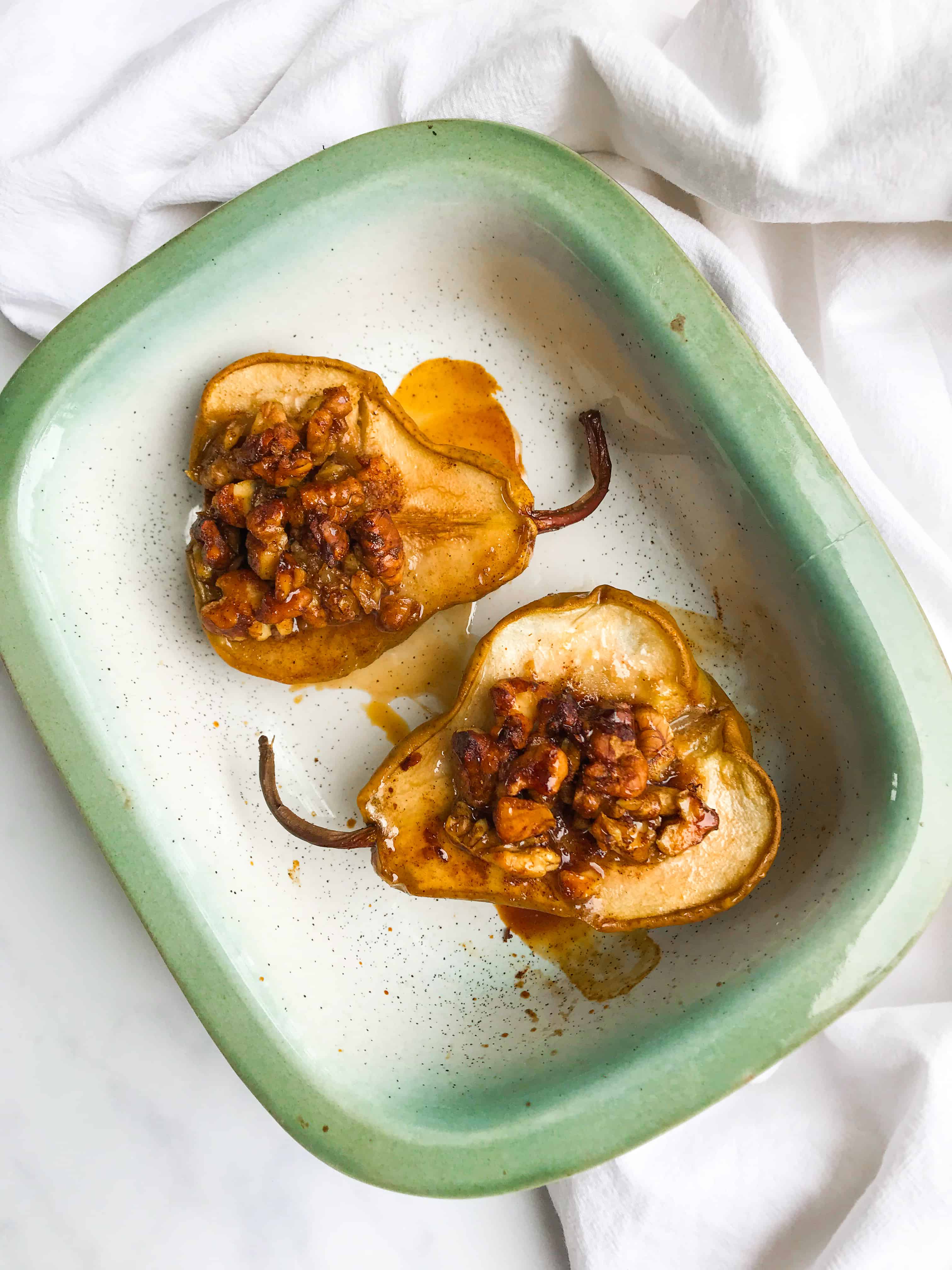 I hope you enjoy this autumnal warmer as much as myself and the hungry people I have fed them too. Make sure if you make my walnut baked pears you leave a comment down below, tag me in IG @georgieeatsuk, or use the #georgieeats.

These baked pears are so simple they will blow your mind! Deliciously soft, sweet and with a gentle spice they soon will become a comforting favourite. Impressive enough to entertain yet quick enough for a weeknight dessert. Vegan, GF + healthy.

These walnut baked pears are perfect for an indulgent weekend breakfast, as a weeknight dessert or even when entertaining a crowd.

To make ahead, fully prepare the pear halves before drizzling with lemon juice to prevent browning and store covered in the fridge for up to 3 days until you are ready to bake.

This recipe works perfectly well doubled, tripled or even quadrupled if you are cooking for a crowd.

WANT ONE EXCLUSIVE RECIPE EACH MONTH?

Welcome!! I'm Georgie, a freelance recipe developer and food writer. Here on Georgie Eats you will find an abundance of simple, vegan-ish recipes that use the best of seasonal ingredients to help you cook and eat more sustainably. Enjoy! Read More →

WANT TO FIND SOMETHING?

WANT AN EXCLUSIVE GEORGIE EATS RECIPE SENT STRAIGHT TO YOUR INBOX EACH MONTH?